Wonder if the turnout will be affected by all the snow that fell yesterday (15 cm, plus another 10 cm expected by rush hour this morning).

Cue the thriller music. Duhn duhn DUUUHN. What will happen? Will the city be rescued in time? Or is Superman stuck in traffic?

Woke up to the promised snow. Environment Canada says 15 to 20 centimeters before it’s done, the Weather Channel says 10 centimeters by Monday. Here’s a shot of the Rideau River through curtain of snow. 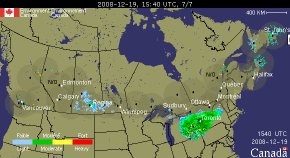 The snow storm is apparently going full bore in southern Ontario, but there are no warnings or watches yet for Ottawa. So, no snowmageddon here just yet.

Environment Canada‘s animated radar imagery shows the storm slowly moving towards Ottawa and Montreal, but who knows if or when it will actually reach us here. There *is* a special weather statement from 06:45 that includes the City of Ottawa and Gatineau and says (in part):

The second in a series of snowstorms is coming in right on target towards southern Ontario today. The Colorado low was born as Expected and is now making a bee line northeast and will move across Ohio today into Pennsylvania tonight. Heavy snow has arrived into southwestern Ontario with Windsor airport already reporting 3 cm in under an hour along with visibility of only a couple hundred metres in heavy snow. The snow will reach across the greater Toronto area during the morning rush hour and on into eastern Ontario by noon. Most of eastern Ontario into ski country will be near the northern Fringe of this storm..With snowfall amounts of 10 centimetres or Less on tap.

Another potentially significant storm also emerging from Colorado will come quick on the heels of todays storm. It will affect a Much broader area including ski country and all of eastern Ontario including Ottawa. Snow and blowing snow will arrive Saturday Night from the southwest to the Golden Horseshoe and north to Georgian Bay. Snow will rapidly spread east across all of eastern Ontario including Ottawa Sunday morning. It will ease off somewhat during the day Sunday in southwestern sections but should Continue Sunday night over eastern Ontario. Total accumulations of 10 to 20 centimetres are quite possible in many regions.

(As an aside, whoever types in the special weather statements either copies and pastes badly or really has no clue about proper spelling and punctuation.)

It’s kind of funny — when you watch the radar animation, you can see the leading edge of the storm flowing around this invisible sphere of protection around Ottawa. Will the full brunt of the storm coming up behind it eventually manage to overwhelm the protective barrier? Or will it continue to just reach around Ottawa to batter Montreal and the northeastern states instead? Oooh, the suspense… 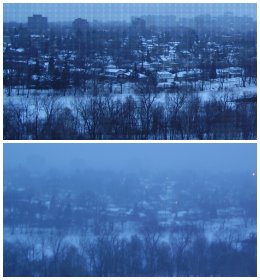 It’s been snowing now for about 1/2 hour or so. There’s a blowing snow warning for Ottawa South.

The first image to the left shows what it looked like (through the screen) when I posted my comment at 16:09.

The bottom image is what it looked like about 20 minutes ago.

The cat had a good roll on the icy cold concrete but didn’t need much encouragement to go back inside again — that should tell you it was nippy out there, since he absolutely loves cold concrete. The Weather Network says it’s -17, -28 with the wind chill.