I’ve never been a fan of Tom Cruise, the actor or the person. I could go into a long, boring explanation of why, but it’s really not important.

What’s important is that, when he appeared on Top Gear with Cameron Diaz last night, he came off completely unfreaky and much more personable than he has in ages. He was quite funny, very relaxed, and seemed more at ease than I think he’s been in a long time. Doing comedies seems to agree with him.

Dare I say it? He actually reminds me now a bit of John Barrowman, who is one of my favourite people (and who is incredibly funny). I’ve said some fairly uncharitable things about Tom over the years (pretty sure I’m not alone in that), but I think I might just have to take those back.

Incidentally, Cameron and Tom both topped the “Star in a Reasonably Priced Car” board, with Tom almost tipping the car over going around the last corner — it was worth it, though, because he beat Cameron’s time by a full second. 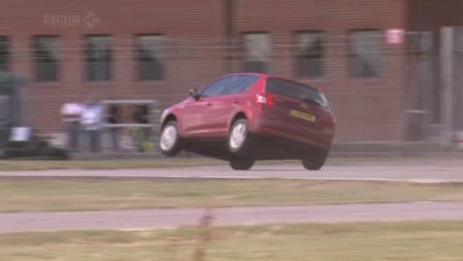 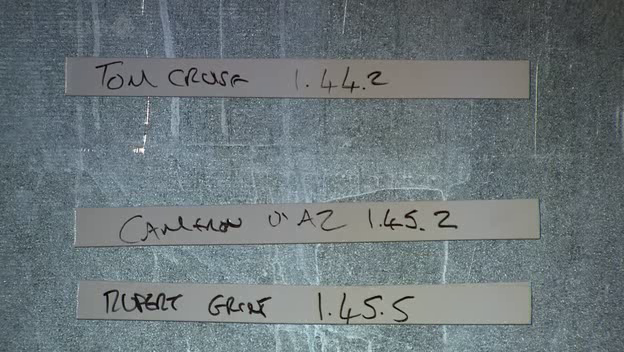 I’m watching old episodes of Top Gear right now. Episode 2-09 (2003) features the most marvelous vehicle I’ve ever seen, the Carver. It’s a three-wheeled cross between a car and a motorcycle that actually leans into corners. It gives you the thrill of riding a motorcycle with the safety of being enclosed in a car. And it seats two.

It’s not available yet in North America yet — they’re estimating late 2009. It cost 22,000 pounds back in 2003. They haven’t sorted out prices for the future North American release yet. Like the Smart Fortwo, it looks like they’ll have to tweak the European design.

So, I need to find a really good job really quickly so that I can save up the money to buy one of these when they roll off the cargo ship. 😉

seem to be eating everything in sight today (well, yesterday and today — I’m having nighttime insomnia again). I’m not stuffed to the gills but I seem to be eating every time I look around. Granted, it’s all “real” food, as opposed to chips or chocolate, so perhaps my body is actually digesting and getting some nutrients out of it all. Seems apropos that tonight’s episode of “Intervention” included a piece about a morbidly obese man. One of the counselor’s said “Food addiction is like heroin addiction — you binge to numb out.” Interesting idea. It does have that effect.

Having a generally introspective weekend. Or maybe month. Hard to differentiate between them sometimes. The latest episode of Top Gear was on last night so I’ve been watching that. I love the show — I love watching men being boys (as long as none of them are “my” man; then it’s just frustrating). Not a huge car fan but they’re fun to watch and, since I’m finding myself thinking that relocating to England some day sounds like a grand plan, anything British just really grabs my attention. (Yay! again for Youtube.) I have a huge thing for the Stig. 😉 The white helmet and racing gear are hot, and you have to love the strong, silent type.

(The description accompanying that last one says “White Stig’s name is Ben Collins and he does most of the top gear track tests but since White stig has existed there have been a few guest stigs including Heikki Kovaleinen who drove the F1 car and the Skidoo jump was done by Dan Lang a Swedish snowmobile cross rider.” — I’d avoid actually visiting the Youtube page as the comments are mindless crap, even by Youtube standards.) I’m so disillusioned.</added>

Found a Stig quotes application in Facebook, and then the Top Gear Facebook page. That got me looking at various Youtube clips that didn’t make it into actual episodes. (That’s how I ended up looking at the Stig videos above.) Much as I like the show, sometimes I think they (Jeremy Clarkson, in particular) take the kidding of each other just a bit too far. Then again, man-children tend to do that when they get together. Do they ever grow up? I have to admit that I have a bit of a soft spot for James May, and he seems to take an awful lot of ribbing. In this clip, they’re discussing a “mood steering wheel” and after James makes the very dark comment “What colour would it turn if you were…sometimes when you’re driving along and suddenly you get that moment of absolute black dog despair when you think you’ve wasted your whole life?“, Jeremy takes things just a bit too far:

I don’t believe for a second that no one in that hangar has ever experienced what James was describing. In fact, I’d bet that more than a few of them have. This blog was started because of that sentiment…minus the driving, of course — and, if I’ve learned one thing in the almost two years since then, it’s that I’m not alone in feeling that way. I’ve mentioned that before. But, as bleak as it is to think that I’ve wasted my life, I hate even more so many other people are in the same boat, like knowing you’re drowning and being unable to save the others drowning around you.